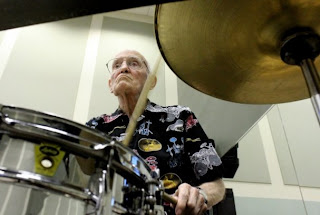 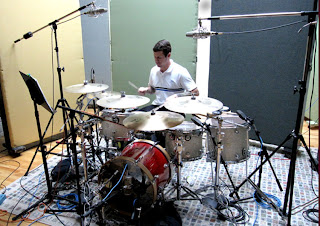 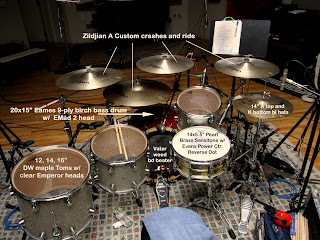 Old friends Dropkick Murphys pulled into Q Division back in October to record "Going Out In Style" with producer Ted Hutt. It was business as usual for us, this being my sixth record with the Boston-based Celt-rockers. Drummer Matt Kelly is one of the more idiosyncratic drummers I know, and as I've mentioned before, his style is grounded in drum corps playing and mixed with an exacting technical approach unique to punk rock. In other words he has his own voice and like the band itself, has spawned some imitators.
We used Matt's fine DW toms (with clear Emperors for a change) for the record but I brought in my Eames 20x15" kick out of retirement to give a quick, punchy attack to the drum sound.
One thing that is often overlooked at a session is the type of beater chosen for the kick drum pedal. The beater and head combination make a great impact (pun intended) on the drum sound, so I usually carry at least 10 different types of beaters in my toolbox and always encourage engineers and producers to explore the different sounds available from the different surfaces. On this particular session we settled on a Vater wood beater, but not before trying out three other beaters. I've really become attuned (yes!) to honing in on the right sound for the project, although in this age of computer editing and Sound Replacer, the sounds that are recorded are not necessarily the ones that end up on the record.
at Wednesday, June 15, 2011 No comments: Links to this post 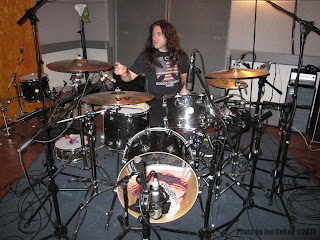 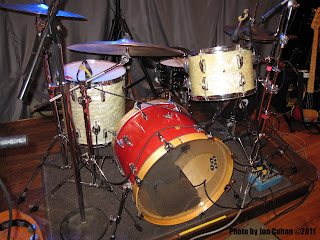 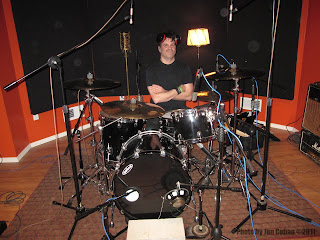 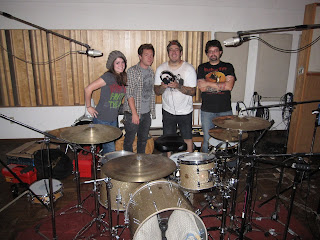 Okay, so a lot of you have contacted me and asked "Hey Jon, what the hells is going on with the blog? Did you stop being a drum tech? Did your reality show American Drum Tech get picked up by the History Channel? Is it true a dog's mouth is cleaner than a human's mouth? What gives?" Ann Oy Ing - Parma, Ohio

There's no real excuse except that life has gotten busy and I've let my entries in the blog lapse for a bit. I'll do my best in the future to keep up. For now I'll throw a few pics at you of some of the myriad jobs I've worked on in the last 10 or so months.
From top down:
1. Jamie Perkins at House Of Loud for Miasha Fisher record
2. My 1960's Ludwigs with my 20x15" Eames bass drum onstage for a gig
3. Mark McCarthy of The Death Of Paris tracking at Scott Riebling's studio
4. Marc Cannata recording for Brittany Gray at The Outpost