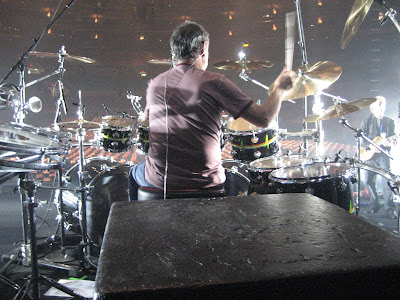 Here's a photo I took at a sound check at Madison Square Garden in 2006. First person to correctly name the drummer in the pic gets a shout out on this blog. Leave a comment below.

ANSWER: It's Nick Mason at a sound check for a Roger Waters show . "Anonymous" had it right. If you look closely at the design on the drums it is from the Hipgnosis-designed cover art for Pink Floyd's "Dark Side Of The Moon".
at Tuesday, September 30, 2008 4 comments: Links to this post 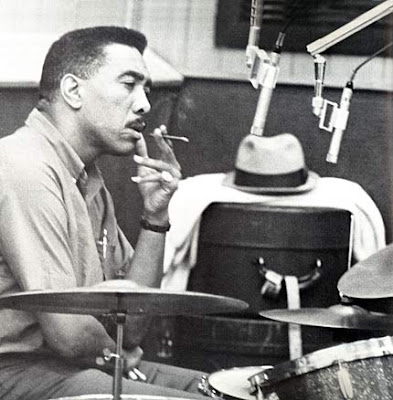 LOS ANGELES (AP) — Earl Palmer, the session drummer whose pioneering backbeats were recorded on such classics as Little Richard's "Tutti Frutti" and The Righteous Brothers' "You've Lost That Lovin' Feelin,'" has died. He was 84.

Born in New Orleans in 1924 and later moving to Los Angeles, Palmer worked extensively in both cities, recording with some of the music world's all-time greats on thousands of tracks.

His beats form the backdrop on Ike and Tina Turner's "River Deep, Mountain High," Fats Domino's "The Fat Man" and "I Hear You Knockin'" by Smiley Lewis.

From his Los Angeles home, Palmer drummed for music producer Phil Spector and Motown, and his session credits include artists as diverse as the Monkees, Neil Young and Frank Sinatra.

Palmer was inducted into the Rock and Roll Hall of Fame in 2000. According to the institution's Web site, Little Richard wrote in his autobiography that Palmer "is probably the greatest session drummer of all time."

I had a chance to spend one of the most memorable days of my life with Earl about three years ago. Chad Smith invited me along to hang with Earl, Hal Blaine, and Jim Keltner for an interview Chad was doing for Modern Drummer. Jim, Chad, and I picked up Earl and his wife and drove to Hal's house in Palm Springs. I set up my video camera and filmed about three hours of Earl and Hal reminiscing about the glory days of studio drumming. There were lots of laughs (and lots of unpublishable stories!) that day and it was an incredible treat to see these two Hall Of Fame musicians, who practically invented Rock and Roll drumming, cajole each other and enjoy each others company. Earl was in declining health but he didn't miss a beat with his warm humor and his easygoing manner. We became friendly and talked a few times after that day. There wasn't a nicer, more generous musician who ever sat down at a drum kit. If you're interested in learning more about Earl's incredible contribution to popular music and the art of drumming, check out his wonderful autobiography Backbeat. So long Earl, keep swinging! 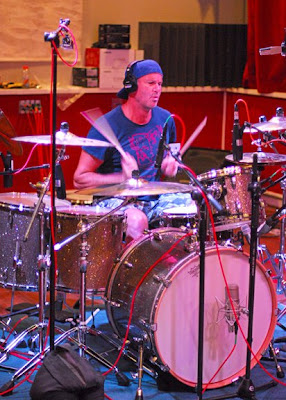 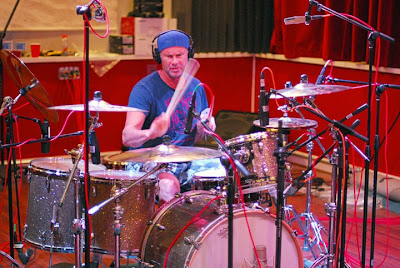 You saw them here first! Courtesy of Chad Smith come these exclusive photos from his new project with Sammy Hagar, Joe Satriani, And Michael Anthony. Tentatively titled "Chickenfoot", the band is in the studio recording their debut with British engineering/producing legend Andy Johns. The material I've heard from these guys sounded exactly like you'd expect: heavy, riff and groove driven rock, with great vocals by Sammy and great VH'esque harmonies by Michael Anthony.
at Monday, September 15, 2008 3 comments: Links to this post 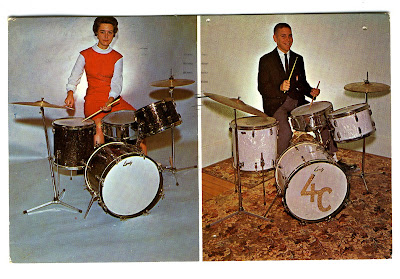 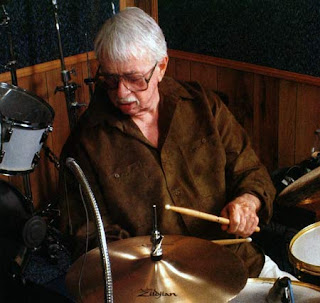 NASHVILLE, Tenn. — - Buddy Harman, one of Nashville's most-recorded drummers, has died. He was 79 years old.

He was an early staff drummer on the Grand Ole Opry and among the first prominent drummers in country music history. 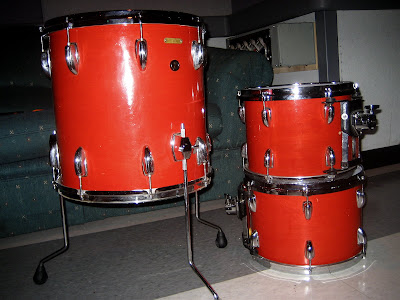 You might notice an ongoing theme in many of my session posts - The ubiquitous Eames tom toms. Why, you ask, do you use those Fire Engine Red beauties on almost every session? Good question.
Short answer: Because they rule!

Longer and more labored answer: Because they simply sound better in most studio environments than any other drum I've ever used. At this point many of the engineers/producers I work with ask for them by name. Why? (See short answer)
Seriously though, Eames drums are completely hand-crafted instruments made one at a time by Joe MacSweeney at his workshop in Saugus, MA. Joe took over the company from Ralph Eames a number of years ago and is one of the only drum smiths in the country to actually make his own shells. (Most so-called "Custom" drum companies use shells made by Keller or Asian suppliers). Eames shells are made from North American birch and Joe actually uses the same 19th century drum lathe that was used by the iconic drum maker Geo. B. Stone at his Boston factory. It is quite a site to behold; the inside of the shell to be sanded or edged is grabbed and secured by the chuck arms of the lathe and then the drum is rotated by an adapted alternating current motor.
The toms I own are 9 ply shells, but Joe offers 6, 9, 12, and even 15 ply drum shells. He was the first drum maker to build a monster hi-plied snare drum shell - before Ayotte, Pearl, or anyone else. There is a clarity of attack and a pure note to the drums that makes them my go-to picks 9 times out of 10 for recording. They have more character than any production maple shells I've heard.

You can have Joe drill the shells for any type lugs you want or he can supply the lugs and other hardware. I made a decision a number of years to go with Slingerland Sound King lugs because I liked the look of them and had access to a good amount. I put die-cast hoops on top and bottom (except for the 15x15 tom which seems to work better with a triple-flange on the bottom) and suspend the rack toms on Pearl OptiMounts (which I think are the best designed and most stable of the isolation mounting systems) .

I generally put a coated Remo Emperor on top and a clear Ambassador on the bottom. For bigger rock sounds I go for just a slight pitch bend by tuning the bottom head a little higher than the top. Too much difference between bottom and top and you get what I like to call the "Basketball Effect" or a rubbery pitch bend that sounds like a rubber ball hitting the floor.
Their favorite microphone seems to be a Senheiser 421 angled in around 3-6 inches from the head. Put the mic through an API or a Neve pre and you got yourself some big ass toms on your record.
at Wednesday, September 03, 2008 4 comments: Links to this post