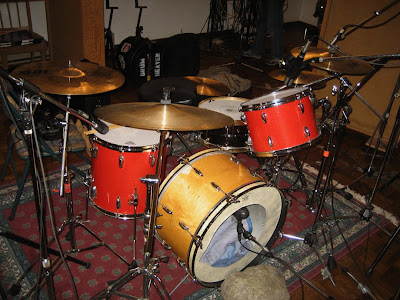 I spent the day at The Outpost in Stoughton, MA laying down basic tracks for a record by my good friend Woody Giessmann. I'm wearing two hats on this one, producer and drummer, and I'm having a blast! With expert backing by Richard O'Connell (Bryan McPherson, Bean Pickers Union) on bass and Mike Pyle (The Beacons) on guitars it's the best rhythm section I've been involved with for a long time.

Besides being the former drummer with 80s rockers The Del Fuegos, Woody is also a a great singer/songwriter who plays a mean piano. I used my 1950s 22x14" 3-ply Gretsch bass drum, the 13x9" and 15x15" Eames toms (with coated Emperors) and the ever-present 14x6.5" Pearl Steve Ferrone snare drum with a CS Batter. I played 13" Paiste signature hats, and alternated between a 22" K. Constantinople Light ride and my prized 20" Avedis Zildjian Ride from the 50s that's as pretty as any cymbal I've ever heard. We got great sounds thanks to Jim Siegel and my buddy Keith Cornella hung out and helped with the Pro Tools.

Here's a quick montage of some of the basics, unmixed, with scratch vocals: 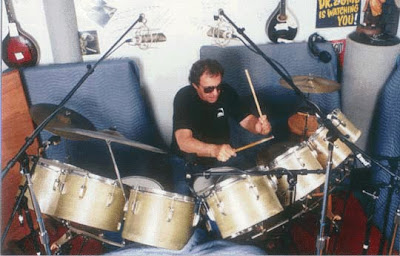 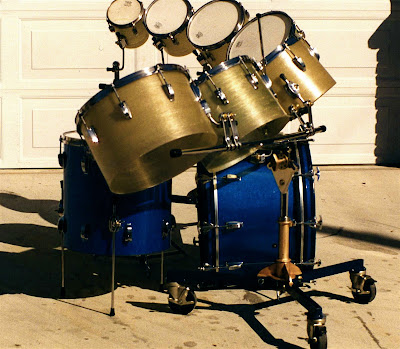 Rock and Roll Hall Of Fame drummer Hal Blaine played on more Top 10 hits than any other musician. In fact, he played on 40 #1 singles, 150 Top Ten singles and 8 Grammy Records of the Year. If you don't know his name, you certainly know his drumming. As a pivotal member of the loose group of crack session musicians known as "The Wrecking Crew", Hal played the iconic beats on such diverse hits as "Be My Baby" by The Ronettes, "Good Vibrations" by The Beach Boys, "Strangers In The Night" by Frank Sinatra, Elvis Presley's "Return To Sender", and literally thousands of other songs from the 60's and 70's. The Monster Kit was developed by Hal along with his drum tech Rick Faucher and builder Howie Oliver. The basis for the kit was a Ludwig Super Classic Blue Sparkle set without the rack tom.The single-headed toms were made of spun fiberglass and Ludwig hardware was attached. Faucher and Howie Oliver created the mounting system in two pieces so it could easily roll into place in the studio. The kit grew out of Hal's signature tom fills - producers began to request the sweeping sounds that only eight toms could produce. Hal was so busy in his heyday that he needed two of these kits so he could leapfrog them between sessions!

I've known Hal for years and interviewed him about the Monster kit for my 1995 book "Star Sets : Drum Kits Of The Great Drummers" (shameless self-promotion!). He talks about using timbales for tom-toms to get a nice pitch bend decay on fills. "I was getting such great sounds with [the timbales], I started thinking 'Gee, if I had a whole mess of these I could do some really great fills.' Howie Oliver came up with the idea to use Klieg light stands for the mounting system. The idea was to augment a regular four piece Ludwig kit, where I could still reach every tom-tom with no problem."

Ludwig thought so much of the setup they stole Hal's idea and created the Octaplus set, which in turn was copied by other drums companies. The single-headed toms set the tone for the drum sounds of the 1970s and in the 80s, drum companies introduced the drum rack, again inspired by the Monster kit's innovative mounting system.

To learn more about Hal Blaine check out his wonderful autobiography "Hal Blaine and the Wrecking Crew: The Story of the World's Most Recorded Musician"
at Wednesday, October 08, 2008 No comments: Links to this post 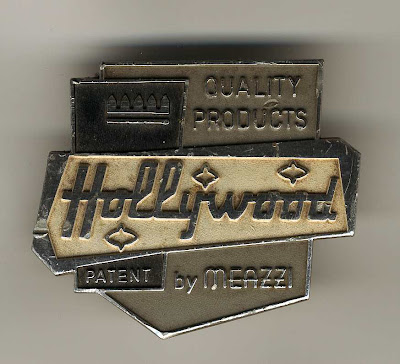 Here's a fairly rare badge I found at Rick Smith's drum show in Connecticut a couple years ago. I don't know much about Meazzi other than they were an Italian company that made really funky guitars, basses,drums, and as you can tell by the picture, drum badges. I know that Max Roach endorsed the company and they released a signature kit in his name. I've seen photos of him playing the kit onstage. If you have any more information on Meazzi Hollywood drums, please drop me a line. I found some Meazzi catalogues on the wonderfully extensive drumarchive.com

An anonymous All Things Loud follower left this comment about Meazzi Hollywood Drums:
" Hi, I own a couple of these sets. Really great. The President model is the top of the line and includes a tunable floor tom. I have a jazz set with a 14" floor tom and a 20" bass drum and what I would describe as a big band set with a 28" bass drum and tunable 16"floor tom. Max Roach used them and also Billy Cobham. They were way ahead of there time and very well made and look great. All mine are very thin shells and I believe the wood is Beech. Watch out as the Jolly series and some others do not sound as good. Check out there [sic] acrylic sets which to me sound better than Ludwigs. I am a little addicted to them. You can find them cheap on ebay from time to time as no one really knows what they are, however in Italy you may have to pay a lot more. There is a clip of Billy Cobham on YouTube playing Nutville and his solo is from 2.25 and Max Roach can be also seen playing them, but I do not like the sound on the recording and feel its not a good representation of how the drums sound, but the Cobham one is close."