I'm excited about the upcoming release of my first foray into the world of DVD's, "Drummer's Night In Boston ", which is a beautifully shot document of the benefit I produced for Right Turn at the Berklee Performance Ctr. in Rocktober 2005. It was one of the great nights of my life, and also a great opportunity for drumming fans to catch some mind-blowing performances by five of today's most talented drummers . Words escape me so here's the catalog copy from Hal Leonard Publishing:
Drummer's Night in Boston 2005; Featuring Chad Smith, John Blackwell, etc.......
This DVD documents a remarkable one-night-only performance by five of the biggest names in the drum world, as they play live onstage, both solo and then together in a show-stopping finale. You'll experience upclose: the amazing handwork of Prince's drummer John Blackwell; the heavy-yet-tasty "band approach" playing by Chad Smith of the Red Hot Chili Peppers; classic rock icon Simon Kirke; and the firey, polyryhthmic, jaw-dropping ensemble playing of drummer's drummers Horatio "El Negro” Hernandez and Eguie Castrillo. The Drummer’s Night in Boston 2005 gives you unlimited access to the artists, with exclusive backstage interviews, and spirited performances captured live with multiple cameras in sparkling digital video and audio.
This is just a temporary cover, the final cover is being designed as I write.

The whole process of putting this beast together has been a real lesson in teamwork and patience for me. Luckily, I've had a great group of folks working selflessly for the last half year. I'm learning a lot, especially from my editor, JB Lamont, who's done an incredible job finding a good rhythm (yeppers) to the piece. We're in the last legs of production and I need to sign off on the final edit before I leave for Europe on Monday.
I should mention here that I'm going to be teching for Chad Smith on the second leg of The Red Hot Chili Peppers' European tour. Really exciting stuff for me. Chad's an old, old friend and he was kind enough to ask me to drum tech on the Peppers' new release "Stadium Arcadium" back in April 2005. Well, I got the touring gig through a horrible circumstance: Chad's longtime tech, Chris Warren, a really great guy and supremely talented road warrior, had an accidental fall off the stage while the Peps were in production in Barcelona two days before the launch of their Euro tour. He was really messed up and had to travel home to Cali to convalesce. This left Chad one day to find someone to fill in while Chris healed. I received a call that night from Chad asking if I could hop on a plane to Spain(mainly in the rain) the next day and help out. Unfortunately, I was just beginning a week where I was booked to tech on 4 different projects in 6 days (!), and I couldn't just leave the producers in the lurch, so I had to say "no" to Chad, which really bothered me, not just because I would have loved to do the gig, but also because he had honored me by calling me first and he needed my help. Long story even longer, Chad called a week later to see if I was available for the second leg of the tour, and this time I didn't even think, I just said "Oh hell yes!". It's a great opportunity for me, but I feel terrible that I got the gig the way I did. It's only a fill-in job until Chris gets better, which hopefully will be very soon. I've never done proper "tour" drum tech work, I've always been a studio guy, but hopefully I can learn what it takes quickly and do a passable job until Chris comes back.
at Thursday, June 22, 2006 No comments: Links to this post 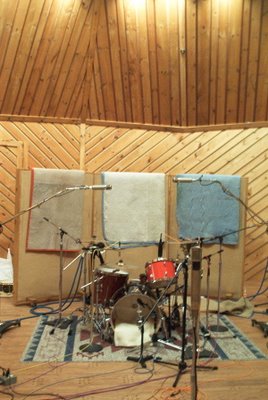 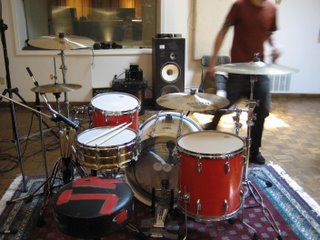 So, it was suggested to me that I should start a blog to keep a record of all the zany things that happen in the course of my travels as a drummer, drum tech*, drum writer**, drum builder, drum consultant, and soon-to-be drum documentary film maker. My drum saga is epic, dear reader, but I won't bore you with the specifics... yet! Right now I'm just gonna see if I can post a pic from a job I did last weekend.

Right on!! It worked! I don't know about all y'all, but I get downright tumescent when I look at a well set up drum kit. There's a certain balance... Takes me back to my youth, circa 1974, sitting in Detroit's Cobo Hall, 12th row, waiting for The Faces to take the stage. Kenny Jones' kit is proudly perched at center stage, partially obscured by the billowing smoke of the sweet-leaf being torched by the many slack-jawed "freaks" in anticipation of the moment when the house lights will dim and Rod Stewart and the lads will jauntily rock-jog onto the stage, sit down at the drums, strap on their git-boxes, grab the microphone, and commence to ROCK. The red crystal lights of the Fender amps, the spinning Leslie speaker, the preliminary tap, tap, tap of the snare drum - all these sights and sounds are burned into my mind like a tatoo. Made quite a big impression on me. You can substitute The Who, Bowie, Zeppelin, P McC and Wings, Johnny Winter, Frampton, Queen, Mountain, and J Geils for the Faces, it doesn't really matter. It was the sense of expectation followed quickly by the rush of energy and the whoosh of sound that hooked me. I memorized those stages, especially the drums. I knew I wanted to live in that world, breathe that air, rock that frickin' crowd! That adolescent dream of mine was strong enough to become a reality a quarter century later. I have played on some of those same stages and worked in some of the same studios as my idols did so many years ago. Sometimes, when I get together with the two childhood friends of mine who also landed in this meshuganah buisness we call "Music", we will reminisce about those days of old and then laugh in amazement that we have somehow carved out a livelyhood doing what we dreamed of doing when we were 13. I hope I never grow up from being that kid sitting in the audience, waiting for the band to start playing.


* A "Drum Tech" is basically someone who tunes drums for studio and stage work. I maintain a large collection of vintage, custom, and current drums that I use for studio gigs as a Drum Tech. More on this later...

** As a "Drum Writer" I've written three books about drums, drummers, and music history. I also write for two drum magazines: DRUM! (in the US), and Rhythm (in the UK)