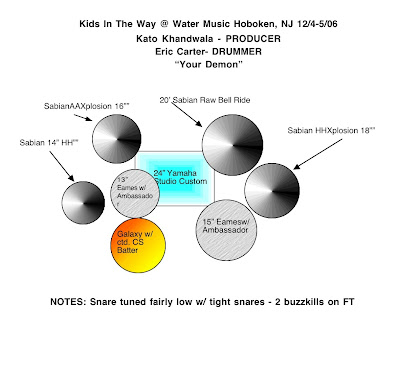 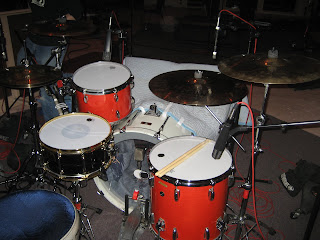 I had worked with the young lads from Kids In The Way on a single in 2005 at Threshold Music and was drafted again by producer Kato Khandwala to tech for their full-length release "Love Hate Masquerade" which we recorded at Water Music Studios in Frank Sinatra's hometown of Hoboken, NJ, just across the Hudson River from Manhattan. KITW's drummer Eric Carter had improved greatly since our first session and attacked each take with energy and power. Sadly, as is more often the case than not, the band broke up recently. Too bad, they were a nice bunch of guys.

And You Think Your Kit Is Big 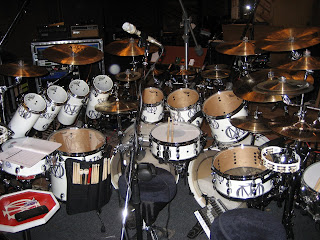 Here's a pic I took of Mike Portnoy's monster drum set at Avatar Studios in NYC in September 2006. Nuff said!
at Wednesday, April 30, 2008 2 comments: Links to this post 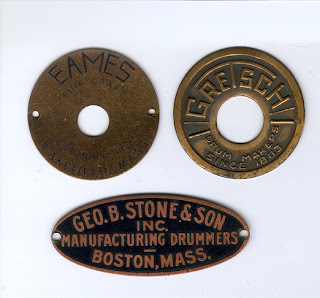 Call me a drum geek (go ahead, I dare you) but one of the things I like to collect are the badges from various vintage and custom drums. So in the spirit of drumspotting, here's some for your viewing pleasure.
at Wednesday, April 30, 2008 5 comments: Links to this post 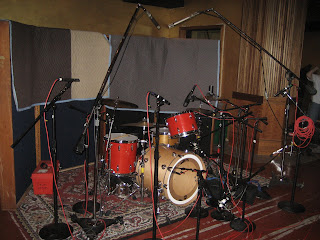 Back at the end of 2006, my friend producer/engineer/pizza chef Scott Riebling asked me to drum tech on a session for Fall Out Boy at Chung King studios in NYC. Scott had been working for producer Butch Walker on various sessions and Butch was producing some songs for FOB's new record. We used Carl Plaster's 22" DW kick drum, my 9x13 and 15x15 custom Eames and went back and forth between a 6.5x14" Drum Heaven Galaxy snare drum (the first one I ever built!) and the Pearl Steve Ferrone. It was exciting to watch lead singer/composer Pat Stump write and demo an entire song and then see the band record it. The result "Don't You Know Who I Think I Am?" can be heard on FOB's 2007 album Infinity On High. The video is of Patrick Stump and Butch Walker laying down guitars. 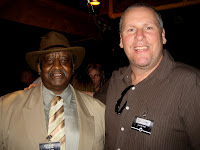 I was in NYC last week and stopped by Smash Studios for a private party thrown by my friends at Sabian. Lots of great drummers like Will Calhoun and Horacee Arnold were in attendance, but stealing the show yet again was the legendary Bernard "Pretty" Purdie. If you don't know who Purdie is, you owe it to yourself to check out his career and listen to some of the classic records he's played on including Aretha's "Rock Steady", Steely Dan's "Home At Last", and many others by Donny Hathaway, Joe Cocker, Hall and Oates, and of course the great King Curtis (see below YouTube imbed).

Bernard is the originator of the "Purdie Shuffle" best illustrated on "Home At Last" and copied by none other than John Bonham on Led Zeppelin's "Fool In The Rain" and Jeff Porcaro on "Roseanna".


Never the shrinking violet, Purdie hopped on the drumset at the party and gave a brief (and poorly recorded by me) but funky dissertation on his patented groove.


Archaeologists in New York have uncovered an early primitive analog drum machine dating back to the pre-Disco era...
at Monday, April 28, 2008 No comments: Links to this post

Drummer's Girlfriend Thinks He Should Sing

National Funk Congress Deadlocked On Get Up/Get Down Issue

CHOCOLATE CITY-The bitter "get up/get down" battle has polarized the nation's funk community. 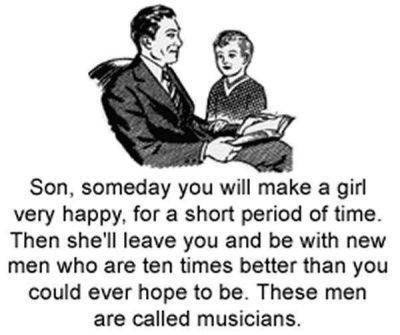 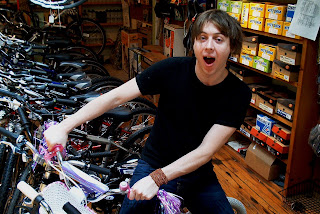 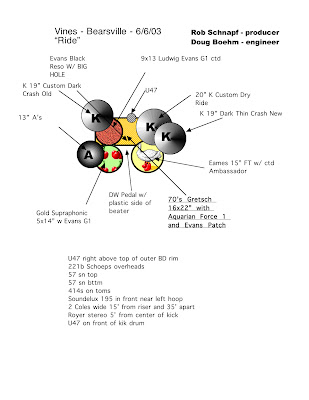 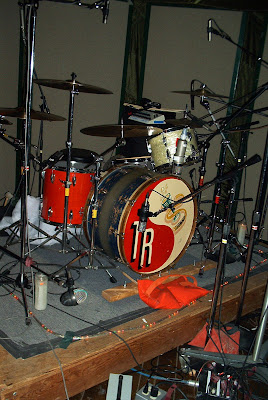 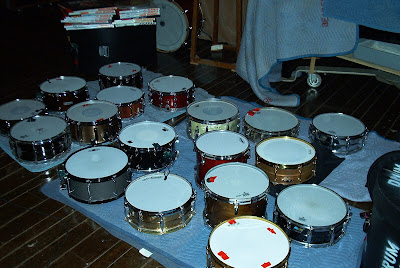 I had the pleasure of being the drum tech on The Vines 2003 release "Winning Days" which was one of the last albums recorded at the legendary Bearsville Studios in Woodstock, NY. Producer Rob Schnapf (Elliot Smith, Beck) helmed the project and Hamish Rosser played the many kit permutations we assembled (We used my 1930's 26" WFL kick drum {above} on a couple of tunes as well as a 1970's Gretsch kick) . A great time was had by all in the bucolic Catskill setting and the song "Ride" has shown up everywhere from an iPod commercial to a national ad campaign for Toyota.
That's singer Craig Nicholls on the bike.
at Saturday, April 19, 2008 No comments: Links to this post 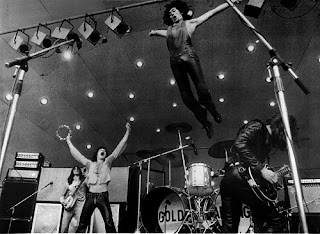 Back around 1974-75, when I was a lad in my mid teens, I saw Dutch rockmeisters Golden Earring perform live in Detroit's Cobo Hall in what I remember was an opening slot for Mountain. At the climax of his solo on "Radar Love", drummer Cesar Zuiderwijk's drum throne seemed to explode and he did a flying leap over his double bass drum kit and landed on his feet at the front of the stage. Now, THAT'S ENTERTAINMENT!!!!
The original video I found on YouTube had the exploding stool ;-) This video is from Top Of the Pops and has the pyro-free leap. Wait for it...

Don't know much about this movie other than what some of the participants have told me but it really looks good. Thanks to my buddy Jerry Deupree for the link.

Ferocious Drummers Movie
at Friday, April 18, 2008 No comments: Links to this post 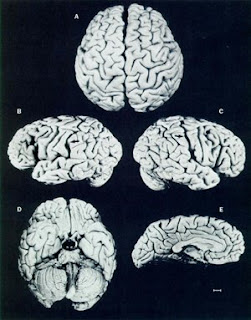 Click HERE to read confirmation of something many of us have suspected for years.


Then of course there is THIS. 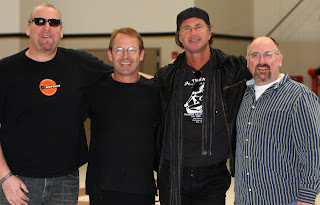 Here's some video I shot on April 14, 2008 of the Rock and Roll Supergroup with Chuck Berry at the Berklee Performance Center to benefit Right Turn, an organization that provides recovery services for creative people. Guests included Simon Kirke (Free, Bad Company), Chuck Leavell (Allman Brothers, Rolling Stones), Chad Smith (Red Hot Chili Peppers), Ricky Byrd (Joan Jett and the Blackhearts), Tim Ries (Rolling Stones), Mark Orrell (Dropkick Murphys), John Conte (Crown Jewels), Barry Goudreau (Boston), and one of the founding fathers of rock and roll, the legendary Chuck Berry. It was an amazing weekend with some great hangs and new friendships. Just seeing Simon Kirke play and sing on Bad Company's iconic "Can't Get Enough Of Your Love" was worth the price of admission. The above photo (Courtesy of the lovely and talented Rebecca Gauchman) is of yours truly with Simon Kirke, Chad Smith, and Right Turn founder and good friend Woody Geissmann. More photos to follow..
at Thursday, April 17, 2008 No comments: Links to this post 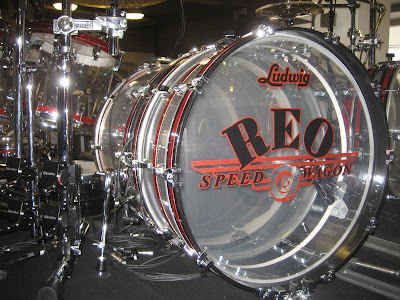 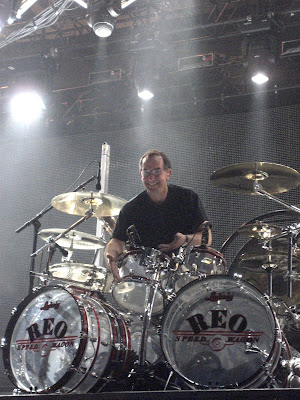 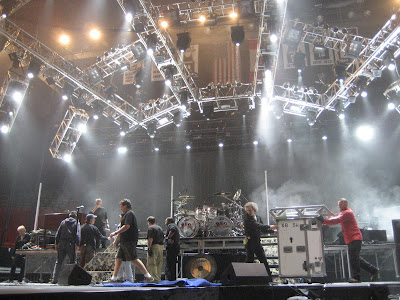 Had a rare chance to hang out with my good buddy John Aldridge, the Godfather of the Vintage Drum scene, when he came to Providence RI with REO Speedwagon this week. I've know John for probably close to twenty years. When my vintage drum obsession morphed into a a vintage drum business in the late 80's I tracked down John, who had a small newsletter/magazine called Not So Modern Drummer and was the foremost authority on such things. I called him and we ended up talking for two hours that first time and have been friends ever since (John still introduces me as his twin brother, which is humorous on many levels) 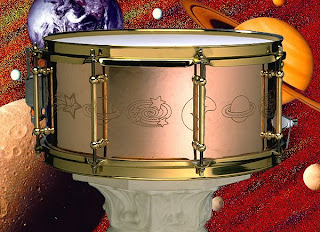 John is also the foremost drum engraver in the business, so when I started making the Galaxy custom snare drum a few years later, I decided to use real brass hoops (which almost no one was offering at the time) and as a tip of the hat to the great drums of the 20's and 30's, I asked John to engrave them. He did a masterful job, and although there are only about 40 or so of those drums around their value is enhanced by John's tremendous artistry. Later he engraved ten hand-hammered copper shell snare drums (see picture) I made as a limited edition run. John and I would room together at early trade shows and always have memorable times staying up until all hours yapping our heads off about Leedy Diamond lugs with the likes of Rob Cook, Chet Falzerano, and the late Liam Mulholland - vintage drum pioneers all.

While the first issues of NSMD were typewritten and Xeroxed, over the years John grew the magazine into THE bible for vintage and custom drum enthusiasts. Still editor of NSMD, he recently sold the business to William Ludwig III who now publishes it out of Chicago.

John has been drum teching for REO Speedwagon for over three years and when I saw him in Providence he showed me the fine set-up he put together for drummer Bryan Hitt. He assembled a custom rack system to suspend the two rack and two floor toms, along with a one legged (!) snare stand which is anchored to the throne.

Also on the tour are Styx (with drummer Todd Sucherman) and headliners Def Leppard. We had a great time catching up and John clued me in on a possible large scale engraving project he pitched to a major drum company. Stay tuned for more details...
at Thursday, April 10, 2008 No comments: Links to this post 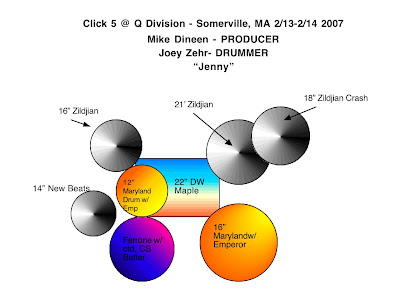 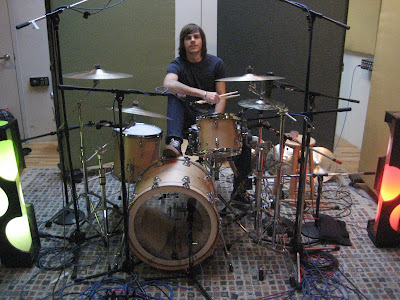 Worked with the fine lads of Click Five back in 2007 with producer Mike Denneen (Fountains Of Wayne, Aimee Mann) at Q Division in Somerville, MA. The result is "Modern Minds and Pastimes" a pop pastiche that reflects the growing talents and tastes of this Boston-based combo. Drummer Joey Zehr was the beneficiary of much whip and nut cracking and as he bashed through basics in record time. 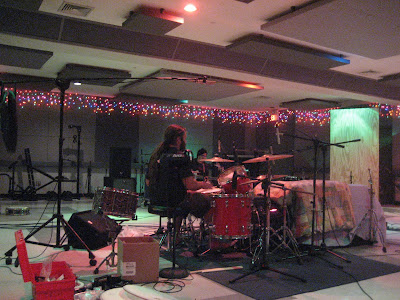 I'm catching up on some bloggin' and one of the most exciting recent projects I did was working again with the band Famous on a few new songs at House Of Loud in Elmwood Park, New Jersey between Xmas and New Years. I worked on the band's first CD "All The Wicked" back in 2005 and became good buds with singer/guitarist Ben Phillips and drummer Jamie Perkins and producer Kato Khandwala (Paramore, Hawthorne Heights, Breaking Benjamin)

House Of Loud is Whitney Houston's old studio that has been transformed by famed producer David Bendith (along with Kato and 2 other engineers/producers) into an amazing Rock and Roll clubhouse/social club that just happens to be a state of the art studio complex. We had a blast hanging out and laughing our asses off, and oh yeah, we got some incredible drum takes. Kato is good at pushing everyone to do their best work and he always makes great sounding records. If you click on the panorama you can see the size of the A room. In the top photo you can see the kick drum tunnel we used to get that big sound.
at Tuesday, April 08, 2008 No comments: Links to this post

You Must Romance The Music Out Of The Tambourine

My lord, what are you doing? Your crude handling of that beautiful instrument borders on the obscene! You cannot carelessly strike a tambourine and expect it to sing its beautiful song. You must coax it out of her. You must romance the music out of the tambourine. 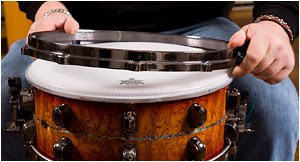 Here's a simple little tuning and head-changing primer I wrote for my good friends at Vater Percussion. Basics of Drumhead Changing and Tuning
at Tuesday, April 08, 2008 No comments: Links to this post