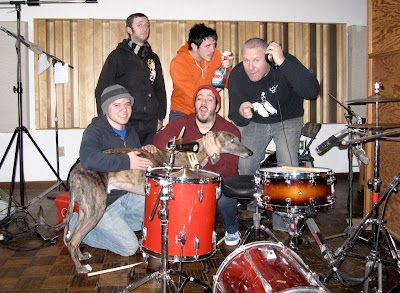 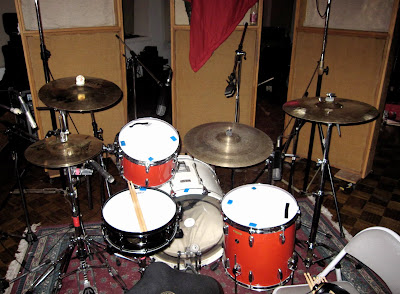 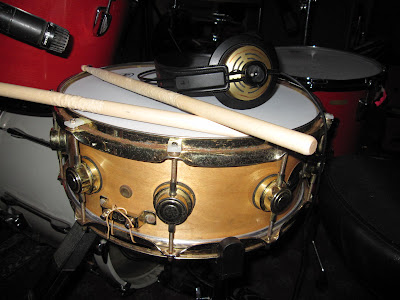 The jaunty lads of Far From Finished came down to The Outpost in Stoughton, MA to begin work on their new CD for Old Shoe Records. Drummer Mark Cannata tracked 13 new songs including a couple kit changes to mix things up. We recorded the bulk of the songs in the center of the studio's excellent main tracking room using my 13 x 9" and 15 x15" Eames toms and the house 22 x16" Yamaha Stage Custom bass drum, then moved the kit to the corner of the room, surrounded it with baffles, and I then heavily dampened the kit with Moongels and paper towels. The different drum sounds will be used to highlight and contrast dynamic changes between the verses and choruses in a couple songs. Mark's heavily corroded solid maple 14 x 5.5" DW Craviotto (pictured above) was a wreck when he brought it in, but after adding batter and snare side heads, new Puresound snarewires, and lubing the tension rods, it sounded great and made it onto 3 tracks. My 14 x 5.5" brass Sensitone was used on 5 songs, and the always-useful Pearl Steve Ferrone made it onto 4 tunes. For an as-yet-untitled song, Mark wanted a drum kit that had a loose, old timey carnival vibe, so I detuned and loosened the snares on a 13 x 6.5" Yamaha Sensitive Series drum , used an old 16x16 Stage Custom floor tom tuned wide open as a kick drum, threw up a circa 1930s 11" Avedis Zildjian sock cymbal and a cowbell. and we got a great raunchy sound thanks to producer/engineer Jim Siegel .

I also had time on this project to tune the snare drums to specific notes that would work with the key each song was in. If the desired snare drum can't hit the actual key of the song and maintain the character we need, I try to tune it to a third or fifth of the note. I've been trying to do this a lot lately when possible, and although most people wouldn't notice it, an in-tune snare drum adds to the overall musicality of a song and has a mild positive psychoacoustic effect on the listener. (I just made that theory up but I think there's an element of truth in there somewhere)
at Monday, January 18, 2010 4 comments: Links to this post

Name That Badge - WE HAVE A WINNER! 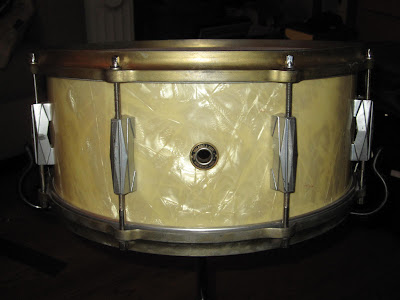 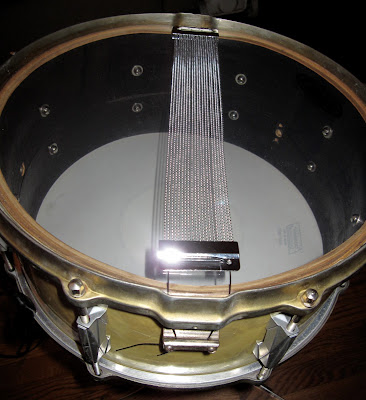 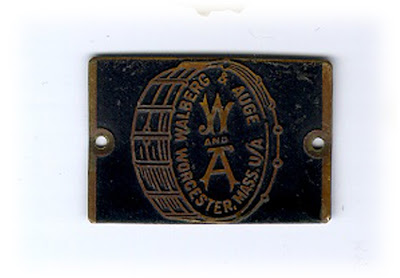 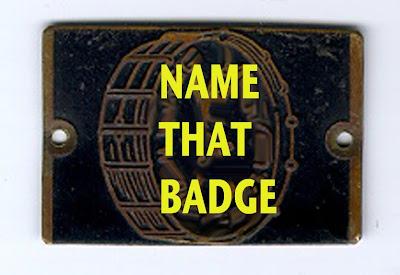 The contest is simple: The first person to correctly identify this badge from a now-defunct American drum company wins. Vote by leaving a comment underneath this posting. First prize is bragging rights as the biggest drum nerd on your block. Second prize is ... well, as Ricky Bobby would say: "If you ain't first, you're last."

Good luck and may the best drummer win...

Blog reader Crider from Germany got it right, it's a Walberg & Auge badge.

W&A was a company from Worcester, MA that made parts and hardware for American drum companies. They also sporadically built drums, most notably the Perfection line, often with W&A-made Gretsch lugs. Above is a 1940's era W & A snare drum I recently restored for a friend. Note the black painted Jasper shell, the Gretsch Rocket lugs, and the Walberg and Auge strainer. (The gold-painted hoops were done after-market by a misguided soul) Here's a non-smudged pic of the badge. Congrats Crider!
at Monday, January 11, 2010 1 comment: Links to this post

More About My Favorite Snare Drum: The Pearl Steve Ferrone 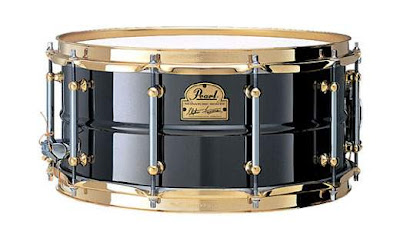 I recently received a good question from an All Things Loud reader named Aaron who poses an interesting question about one of my favorites, the sadly discontinued Pearl Steve Ferrone 14x6.5" Signature snare drum.

Aaron asks: "Have you had any experience with the new Gretsch Steve Ferrone Signature kit or snare? and if so how does that compare with the Pearl?"

Well Aaron, I haven't had any experience w/ the Gretsch Ferrone drum, and I don't know how much input Steve had in designing the Pearl or Gretsch drums, but at a quick glance , the new Gretsch looks to be fairly similar to the Pearl drum which itself was a knock-off of a Ludwig Black Beauty. IMHO, what made the Pearl version so good is that it was a little more robust than a stock Black Beauty with a thicker shell (albeit NOT spun brass), heavier tube lugs, longer snare beds, and brass Super Hoops. The Gretsch drum has 2.3mm triple-flanged hoops as well, but I don't believe they are brass . Having owned a few Black Beauties from different eras, I think it's the Super Hoop and the snare beds that make the biggest difference. In my opinion, it's very hard to beat the sound of a brass shell snare drum (especially the Pearl Ferrone) when recording rock music. The attack is great, but what makes brass stand out above other metal drums is the musical quality of the tone and it's reactivity with the snares. I've A/B'd the Ferrone against a lot of snare drums (including quite a few Black Beauties) in the studio with many drummers, engineers, and producers and it always wins. That's not to say that it's the perfect drum for every type of music or song, because I often bring in another snare for a specific sound and color, but all things being equal the Ferrone just seems to stand up better under the mics than most snare drums. (The Tama Lars Ulrich Bell Brass aka "The Terminator" is another excellent choice for louder rock recording)

I'm an equal opportunity drum tech. I don't care how cheap or how worn a snare drum is, if it has the right sound for the song, I'm gonna use it. A drum has to earn it's place in my arsenal and to be honest the Ferrone sat around for awhile before I used it on a record. I bought it used and it came with an coated Ambassador head on it. I had hard time getting a good sound with it until I switched to a Remo Coated Controlled Sound batter head and added my own 24 strand snares. A lot of the engineers and producers I work with specifically ask for the drum when they hire me but I always give them a choice of other drums depending on the music. I really enjoy my 14x5" WorldMax Black Dawg and my latest aquisition: an inexpensive 14x5.5" brass Pearl Sensitone that I fixed up and hot-rodded for the studio.

While I'm on the subject, I always ask the producer and drummer what type of sounds they are looking for when deciding what drums I will bring to the studio. It's important that I get an idea of the type of music being recorded and how a drummer plays when I am choosing instruments for a session. That being said, there are certain drums and cymbals I will always take with me and the Ferrone is one of them. It's just that good.

PS: If anyone has had a chance to play the new Gretsch Ferrone drum, please drop me a line and let me know what you think.
at Friday, January 08, 2010 4 comments: Links to this post