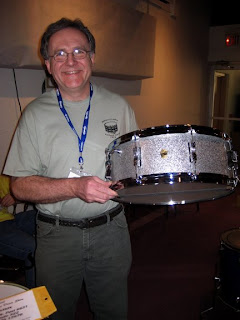 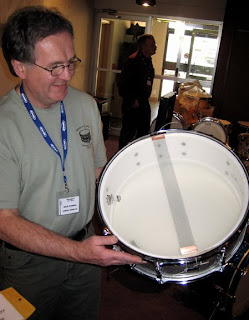 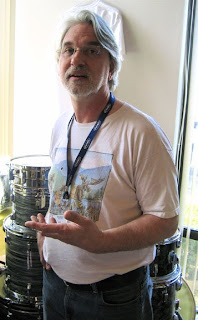 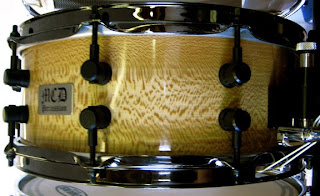 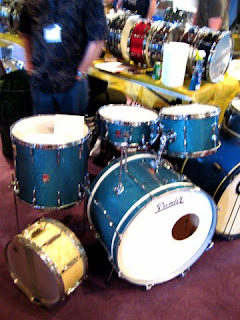 I drove down to Newington Sunday and spent some time at the Connecticut Vintage and Custom Drum Show. I did lots of schmoozing with old drum biz friends and vintage collectors and did some serious drooling over drums that I wanted but definitely did not need. The kit I almost went to the bank machine for? The late 60's/early 70's 4-piece Premier kit in gorgeous Aquamarine Sparkle at Carter Harris' booth (bottom photo). I love vintage Premier's; they were very well made, the hardware is great, and they usually sound fantastic. Carter was asking a very fair $750, snare included. It was a real test of my willpower to walk away from that, especially since the Aquamarine is one of my fave coverings . (I'm still kicking myself for not grabbing a 14x22" Radio King bass drum priced @ $150, but that's another story)

Ran into my buddy Joe Montineri (third pic from top), one of the first custom drum builders in the industry. In his former role as Product Development Manager at Keller, Joe designed the Vintage Mahogany and Vintage Maple shell lines. He's one of the most knowledgeable drum makers in the business and he helped to pioneer the custom drum industry that has grown so big in the last few years. I thought I knew a lot about what makes drums sound good until I met Joe...

I stopped by the MCD Percussion. booth and checked out some of their beautiful solid shell snare drums. The drum that caught my eye and ears was made from sycamore (second photo from bottom) and has wonderful figuring. Sycamore is a relatively soft wood to make a drum from, so I was surprised by the rich tone and full body of the drum.

The top two photographs are of Jack Lawton of Lawton Drum Company. No, Jack is not a little person, that's an 18" diameter snare drum that was custom made for a customer to replicate a drum used in a Beatles video where the fab drummer is playing a giant kit. It's an oversized 60's Ludwig Jazz Festival snare, complete with Keystone badge, white interior, and muffler. The snares were custom made by Puresound, but the real surprise was how good the drum sounded. It was all I could do not to order one on the spot, just to see the look on the faces of the engineers when I pulled it out at a session.
at Monday, April 20, 2009 No comments: Links to this post 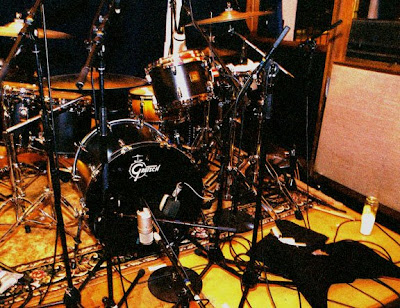 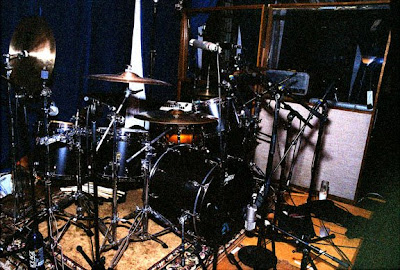 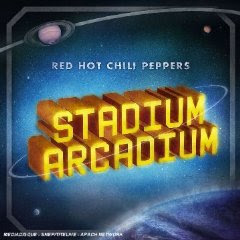 After many e-mails from ATL readers, I realized I never actually had made an entry about the sessions I worked on for the Red Hot Chili Peppers, so as per your requests, here's the story (four years later!) behind my work on Stadium Arcadium:

Back in April/May 2005 Chad Smith magnanimously asked me to come out to L.A. to drum tech on the Red Hot Chili Pepper sessions that would become the double CD "Stadium Arcadium". The record was being produced by longtime Pepper's collaborator Rick Rubin and was recorded at Rick's Laurel Canyon mansion studio known as "The House", an aging Grand Guignol structure where the Peps had also recorded their 1991 breakthrough blockbuster "Blood Sugar Sex Magik".
I shipped about eight of my snare drums out to LA and we also rented a new Gretsch kit and more snare drums from Drum Paradise. The job itself was one of the easiest ones I've ever been involved with. Rick Rubin runs a laid back session and the band was incredibly well prepared, having done about nine months of writing and pre-production before they set foot in the studio. Chad, like many other great drummers, can make any drum sound good, and he was very good about communicating what kind of sound he wanted for each song. We'd pick out a snare accordingly, sometimes changing up after a first take if we weren't getting the right sound. Standout snare drums were a Gary Noonan custom 5x14" brass snare, a 6.5x14" 20-ply Pearl Reference wood shell snare, my Pearl Steve Ferrone, and a Yamaha David Garibaldi 3.5x14" brass shell drum. I used coated CS batters on most of the snares and Emperor heads went on all the toms.

The whole experience was a pleasure made even more comfortable by my luxurious lodgings at Chez Smith courtesy of Nancy and Chad, who's son Cole was born in the middle of the two month session. The resulting platinum-selling album speaks for itself and went on to win a whole mess of Grammys and other awards. I'm proud of the work I did, but to be honest I could have put up garbage cans and they would have sounded great.

Sadly, my early-vintage digital camera died during the session and I lost a lot of great pics, so these shots came from a disposable "analog" camera my last night on the job.
at Monday, April 13, 2009 1 comment: Links to this post 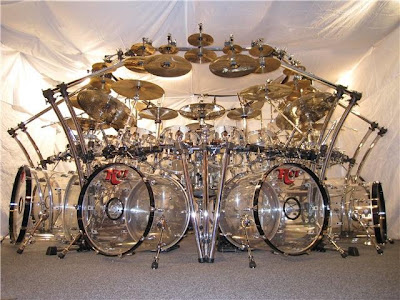 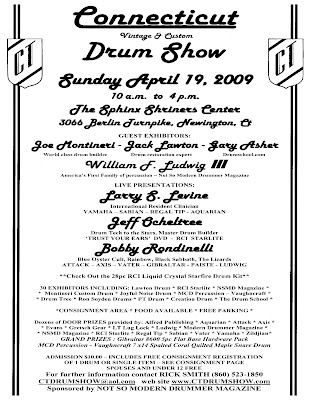 The Connecticut Vintage and Custom Drum Show for 2009 will be held on April 19th, in Newington Connecticut. The show will run from 10a.m. to 4p.m. and will be held at The Sphinx Shriners Center. Over 30 exhibitors, consignment area, and dozens of doors prizes. Special guests include Jack Lawton, William F. Ludwig III, Gary Asher, and Joe Montineri. Live performances include clinics by Larry Levine, and Bobby Rondinelli, and a tuning seminar by Jeff Ocheltree. For further information contact Rick Smith, at (860) 523-1850, or CTDRUMSHOW@aol.com. Check out the web site - www.CTDRUMSHOW.com
at Friday, April 10, 2009 No comments: Links to this post 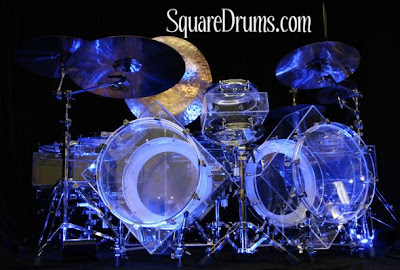 Has the world gone crazy? Square drums?!?! What's next, shark-shaped guitars? Don't know anything about these drums except that they are square and I want me some. Link HERE
at Tuesday, April 07, 2009 No comments: Links to this post