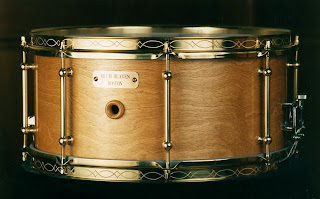 Back in the early 1990's I had a nice little sideline business buying, selling, and restoring vintage drums. I called it Drum Heaven. It was a great way to get my feet wet in the drum world and learn the ins and outs of what made those great American drums so great. At that time, unlike nowadays, the major drum companies weren't putting a lot of imagination into the design of their products. Sure there were some nice drums being made by the Japanese drum manufacturers and DW was making inroads into the market, but the once dominant American companies like Ludwig, Gretsch, and Slingerland (Leedy and Rogers were all but nonexistent) were foundering under poor management, lack of innovation, and disinterest by parent companies. They were losing huge chunks of market share to the Japanese, who were making big advances (and profits) in the drum biz by applying the same creativity and design ingenuity they had used to capture the American auto market. 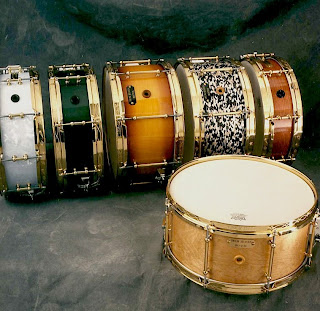 In the meantime there were growing rumblings by a small handful of craftsmen who were committed to building quality hand-crafted instruments for the growing number of discerning drummers and collectors who were demanding more quality from their drums than what was available from the major makers. It was in this environment that I started daydreaming about building my own custom snare drums. I knew the vintage drums I was restoring sounded and looked better than any of the modern products I had played. There was an attention to detail in the choice of materials, visual appearance, and quality of construction that had somehow been lost over time. Just take a look at a Leedy Elite, a Slingerland Radio King kit, from the 30's and 40's, or a 1920's Ludwig Black Beauty and you can see the marriage of form and function that these drums personified.

I had also developed a nice full Rolodex (remember those?) of contacts who were willing to share info and knowledge about drum building. I had a good relationship with Joe MacSweeney of Eames Drum Company who made amazing hand-crafted birch shells and was willing to share his thoughts about what made a good sounding snare drum. John Aldridge, master drum engraver and publisher of NSMD magazine was a good friend. Other custom snare drum makers were happy to let me pick their brains. This was before every Joe RackTom or Sally SnareBed knew about the Internet, so very little information was available about drum making and design. I had noticed what a big difference real brass hoops had on the sound of a snare drum, compared to alloy hoops, so I searched out a manufacturer who was willing to make them and imported them from China and then had John Aldridge engrave them. I used an undersized Eames 15-ply birch shell to replicate the Leedy Floating Head design and cut a rounder bearing edge and longer snare bed that mimicked the full bodied drums made by Slingerland and Ludwig during the 1930's. At first I used the fine brass tube lugs made by Don Corder, but later switched to a local machinist here in the Boston area. I also stole/copied duco finishes from vintage drums, but made them translucent so the beautiful figuring of the birch could be seen through the nitrocellulose lacquer. All of these elements were fairly radical at the time and unlike now, you could count the custom drum makers in the USA on two hands . 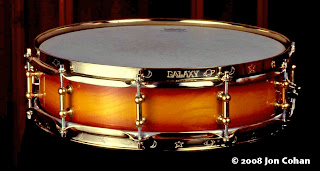 I received a great response when I debuted the drums at the Winter NAMM show in Anaheim. I knew I was onto something by the amount of reps from the major drum companies that came by to examine my Galaxy snare drums. Drummers like Dennis Chambers, Peter Erskine, Richie Hayward, and guitarist Ry Cooder all stopped by my booth to check out what the buzz was all about. The engraved brass hoops, brass tube lugs, luxurious finishes, and thick birch shell combined to make an impressive looking and sounding drum (if I do say so myself!). In designing and building the drums I gained a lot of valuable knowledge through making and fixing mistakes (at one point I had to recall some ten drums because of improperly cured lacquer finishes and poorly seated tube lug stems!) and by tireless trial and error.

Eventually, due mostly to my lack of bottom line business acumen, I retired from drum making and watched as the custom drum industry grew into what it is today. There are quite a few Drum Heaven Galaxy snare drums out there and every once in awhile I'll get an e-mail from an original owner or someone who has purchased one on EBay telling me how much they enjoy the drum. It made it onto a lot of recordings, one of my faves being "Early To Bed" by Morphine with my friend Billy Conway on drums. You can check out the video below...