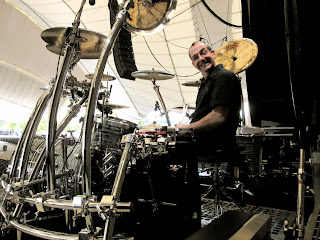 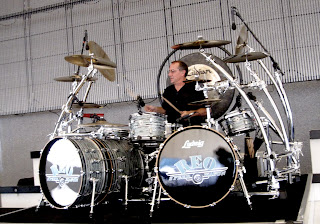 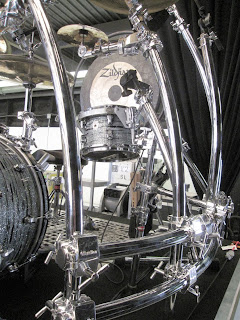 My good friend John Aldridge recently came through Boston in his role as drum tech for Bryan Hitt of REO Speedwagon. You may remember John from some of my earlier posts. He is America's premier drum engraver, having "scratched" drums for Ludwig, DW, Tama, Joyful Noise, and your's truly among many others. John was also at the forefront of the vintage drum craze - he founded Not So Modern Drummer magazine, the vintage drum bible for many of us drum geeks. Suffice to say, he has forgotten more about drums than most people know.

John has created yet another drumset masterpiece with Bryan and I had a chance to climb atop the riser and get a closeup look at the double bass drum Ludwig kit. Let's ask him how he put that bad boy together.

Well, since you asked, the kit that you see in the pictures was the first one made with the Mint Oyster Sparkle finish. Bryan saw a swatch of the finish at the last NAMM show and ordered a kit on the spot. The configuration of the set is 10" 12", 14" 16" toms, all standard depth, 14X22 BD's, 10x22 Woofers, all with Ludwig Super Classic shells, and Keystone series hardware. It's not a stock, off the shelf kit in that the drums in the Keystone series have a different shell. The drums sound really good and I like the look of the new keystone lugs and brackets.
The rack is the result of an evolving concept that started a few years ago with Bryan's previous rack. I'm a big fan of racks and I had seen enough Gibraltar stuff to get an idea for a curved rack that would eliminate all the other hardware. When it came around to building a new rack, I suggested using rack tubing in curved sections instead of the cymbal stands with all the joints and angles in them. Bryan gave me enough rope to hang myself and here's the result. It's a fairly whimsical rack in that there are no right angles to be found. Even the side curves are at upswept angles to create the right positioning of each cymbal at the end of the vertical bars. All of the tubes used in the new rack were ordered in Gibraltar's longest size to insure consistency of the curves. After using two of these tubes for upright corners and two more for horizontal crossbars on each side, I cut sections and used Gibraltar's angle clamps, adaptor ends and t-legs to make it a homogenous looking rack with as little "non-rack" hardware as possible. With the exception of the cymbal tilters, which are all made by taking the boom arm off a Ludwig Mini-boom and cutting about half the tube off, the only non Gibraltar pieces on the racks are the mic stand adaptors and overhead booms.
The middle rack is a conglomeration using two one legged snare stands with t-legs added for stability on the front and back. Then the two are connected with another rack bar at the base of each "T". I then use rack clamps and mic stands attached to that bar to mike the top and bottom of the snare drum from below. All of this eliminates the need for visible mic stands on the kit. The tom mics clamp onto the hoops, and the bass drums and woofers are all miked internally.
Any Questions? Ask away. I can be reached at NSMDjohn@aol.com. And by the way, thanks for saying all that nice stuff about me Jon, but you still can't have my Radio King 24" bass.
Love ya!
Your twin brother from another mother
John Aldridge

During some downtime, John kept his engraving skills (and tools) sharp by scratching designs onto an aluminum water bottle. He also told me about an exciting new venture he will announce in the near future that will put all his substantial drum knowledge to good use. Stay tuned.

Click on the photo below to see more pics. Watch in "Slideshow" mode for the best view.