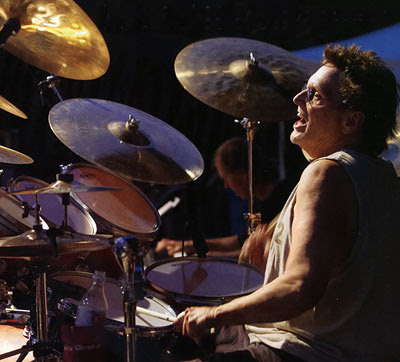 We lost the great Richie Hayward to liver cancer this week. Richie was one my earliest and most important drum influences. His talent, taste, and pocket were without peer. If you're not familiar with Richie's drumming you owe it to yourself to check it out. One of the best examples of his talent can be found on Little Feat's wonderful live record "Waiting For Columbus".

Here's his obit in the New York Times.
at Thursday, August 19, 2010 No comments: Links to this post 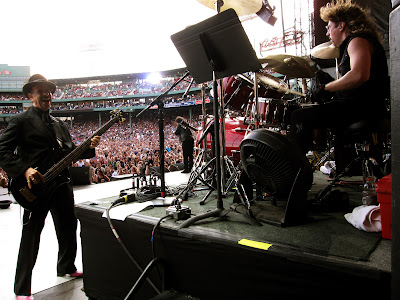 What a week! I started in New Jersey working on Cold's new record, then drove back up to Boston to work with The J. Geils Band on their gig with Aerosmith at Fenway Park in Boston. Drummer Marty Richards used his fine Pearl Masters Premium drums and Zildjian A Custom cymbals. Besides having the best seat in the house for the gig, I was able to wander through Fenway and sit in the Red Sox dugout and pretend I was in the major leagues. Some of us will never grow up! 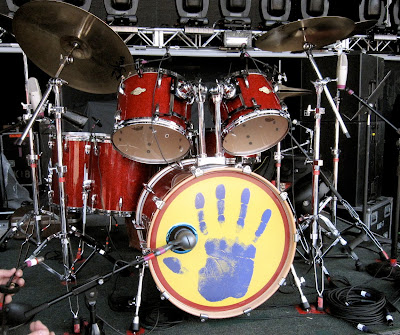 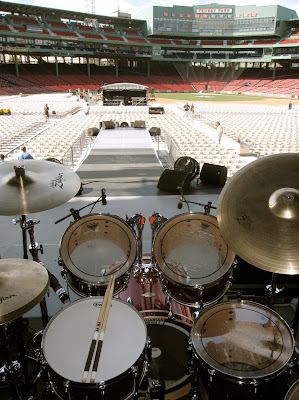 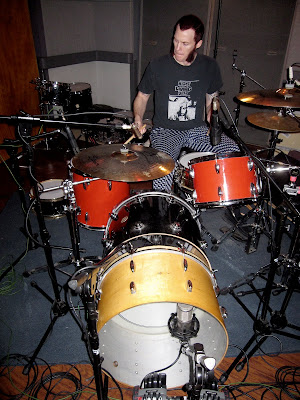 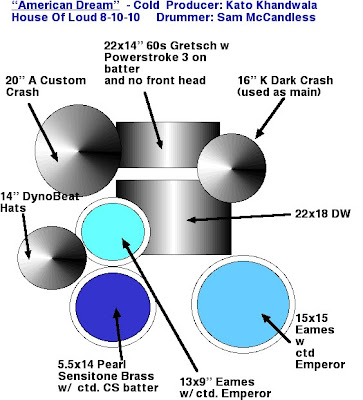 It's studio tan time down here at the House Of Loud in New Jersey working with drummer Sam McCandless and his bandmates in Cold. We're just tracking a few songs and Sam likes to keep it simple drum set-wise: kick, snare, rack, and floor, hi-hats, crash and a ride, so my job is easy. Even easier if you consider that mixing legend Dan Korneff got great sounds (before we even noticed he was trying to get sounds) and producer Kato Khandwala is sprinkling his hit-making magic dust on the proceedings.
The vinatge Gretsch bass drum "tunnel" is a new twist on an old studio trick. Instead of the common ploy of using just a headless shell to get a longer chamber (and hence a deeper sound)for the air to move through, I keep the batter head on the Gretsch, allowing it to take the original attack of the DW and use the older shell as a second resonator. For some reason this works better than a double-headed kick drum or just a shell used as a tunnel.
at Wednesday, August 11, 2010 No comments: Links to this post

Time to Take In The Trash 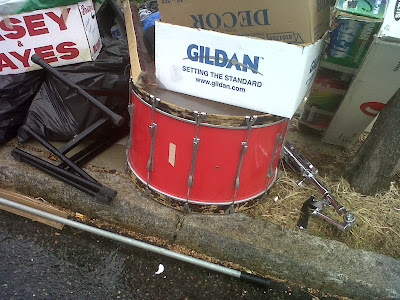 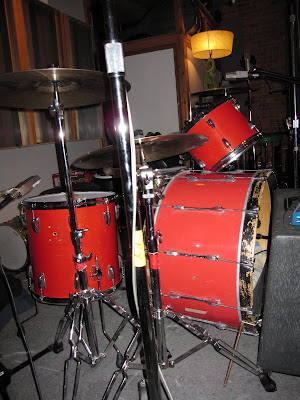 Twas' a cold day in April when I walked out of my front door and I spied a familiar shape in the trash pile in front of the middle school across the street. Upon closer inspection it turned out to be a 26x14" Ludwig marching bass drum. Just by chance I was playing on a session the next day at Camp St. Studios with the After School Kids and the song called for a deep kick drum sound. Even more serendipitous was the fact that the wrap on the Ludwig almost matches my Fire Engine Red Eames tom-toms. Engineer Adam Taylor miked up the beat and got a great sound. On the last downbeat of the last take my bass drum beater broke through the old head.
at Tuesday, August 10, 2010 No comments: Links to this post 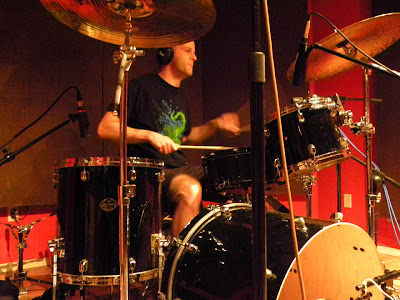 It's August and I'm just finally catching up with my blog posts. Thanks to all of you who lovingly busted my chops for not posting in awhile. Things have been relatively slow and I've been typically lazy but I haven't forgotten about you. I promise I'll call soon. The check's in the mail. There was a possible deal in the works for the blog to be sponsored by a drum-related company, but alas like so many ventures in this business of music, it fell through. That being said...

In March I spent a pleasant afternoon at my good friend Scott Riebling's excellent new studio in Raynham, MA while drummer Alex Mihm and his band Eksi Ekso recorded tracks for their upcoming opus. Alex and Scott had already sorted out most of the drum sounds by the time I arrived so my role was more of a straw boss or Monday morning quarterback than a drum tech. Alex posted an excellent entry on his blog here. The basic kit was Scott's Tama Starclassic augmented by many snare drums including Alex's 14x6.5" Ludwig Supraphonic, Scott's Noble and Cooley Alloy snare as well as his Yamaha 6.5" and 5.5 " Manu Katche drums, and my Raw Brass and Pearl Sensitone snares.

Thanks to Alex for the pic of him playing. What a stud.
at Tuesday, August 10, 2010 No comments: Links to this post