From My Drum Arsenal: The Raw Brass Snare Drum 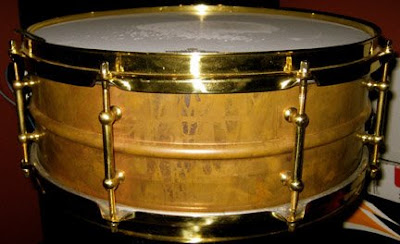 Behold my 14x5" Raw Brass snare drum, a one-of-a-kind custom creation that has beaten it's way into many a drummer and producer's heart. The shell came from my good buddy and the Godfather of the vintage drum scene John Aldridge. He had tried to start a drum company to build brass shell replicas of 1920s era Ludwig Black Beauties, but when a problem occurred with the metal spinner who was fabricating the seamless shells, John had to shelve the project into which he had sunk a considerable amount of money. He was left with a few choice shells, one of which he generously donated to me. It sat on the shelf for about a year before I took the time to drill and assemble the drum. I used some 8-hole brass hoops and 8 brass tube lugs I had left over from my Galaxy Snare Drum days and I threw on some 14 strand Puresound snares and a brass-plated Ludwig P-83 strainer that was laying around.

I owned plenty of brass snare drums already so I thought I'd try something different. I had noticed a marked difference between the sound of old brass snare drums compared to newer ones, but I didn't have the patience to age the shell for 75 years to mellow it's sound, so I left the drum unfinished to provide a less reflective surface for sound to bounce off of and hopefully get a warmer tone. Normally, brass drums are buffed and lacquered (or black nickel-plated in the case of the Black Beauty) to produce a lasting shiny finish. I have always liked the patina that certain metals acquire through oxidation over a period of time so I thought the drum might look unique and change appearance over time.

The result is what you see above. I started using it on sessions and the response was overwhelmingly positive. The drum has tons of body and just as I had hoped it was less brittle sounding than a brand new brass snare drum. It is one of my "go to" drums when a focused, bright sound is required.

Here's the Raw Brass snare drum on That's How You Know by Morningwood: